This page gives a coarse overview to the license situation of micro-ROS. It is not intended as a legal advice and it does not relieve you to look at the license texts of all components that are used by your micro-ROS-based application or system (i.e. “product”).

The following architecture diagram lists the most important repositories with their respective licenses in the form GitHubOrganization/RepositioryName [LicenseName]. 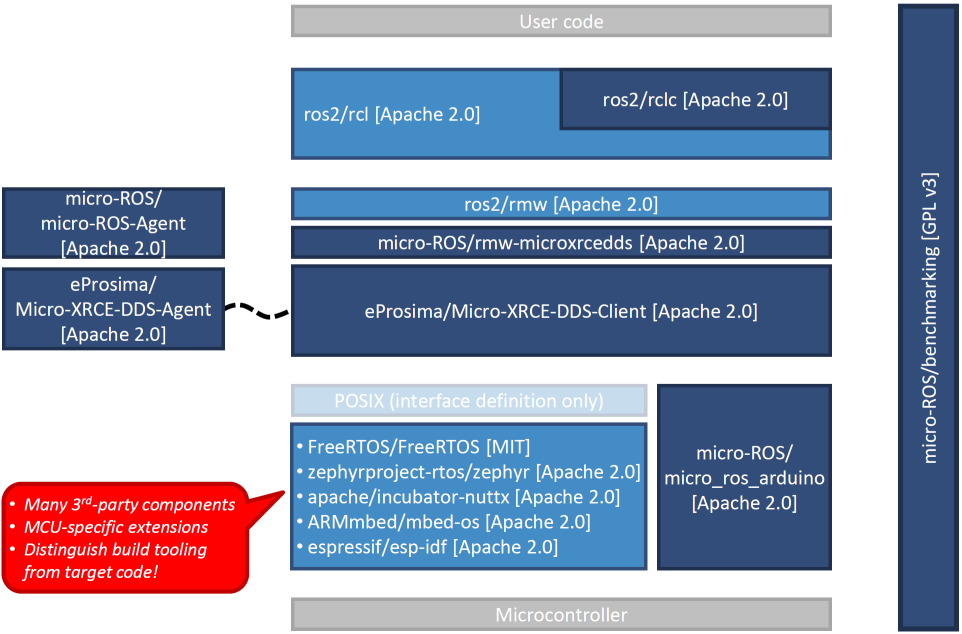 One exception is the micro-ROS benchmarking tool. As it links against GPL v3 licensed libraries, it is itself provided under GPL v3. As long as the tool is used by you during development only but not included in the distributed product, this does not affect the license of your product.

Things get particularly interesting at the RTOS level: The micro-ROS build tool micro_ros_setup and the various modules for external build systems are provided under Apache 2.0 but use or are combined with very differently licensed RTOS and board support components. The fact, that typical embedded toolchains build the whole software (RTOS, micro-ROS and application) into one binary image makes the situation more complex compared to typical desktop operating systems with clear separation of individual executables and the OS kernel (cf. for example the Linux syscall exception to GPL).

We are aware of the following important license specifics in the RTOS supported by micro-ROS:

… and in the corresponding tooling: