This demos aims to show the benefits of micro-ROS regarding its low resource consumption and its extensible and modular communication system. In particular, it is focused on the micro-ROS’s middleware layer where eProsima Micro XRCE-DDS is the default implementation. This software, base on the DDS-XRCE wire protocol, offers to micro-ROS client-server communication with the following characteristics:

Each one of the aforementioned characteristics will be used around this demo.

An MAV (Micro Aerial Vehicle) overflies a given area commanded by a Flight Operator through a GCS (Ground Control Station). Remote Sensors, distributed over the area, takes environmental measures (temperature, pressure and humidity). The Flight Operator shall command the MAV toward the Remote Sensors and once positioned over them, the MAV shall establish a connection with the Remote Sensors in order to gather its data. Finally, the Fligh Operator shall command the MAV toward the home position. 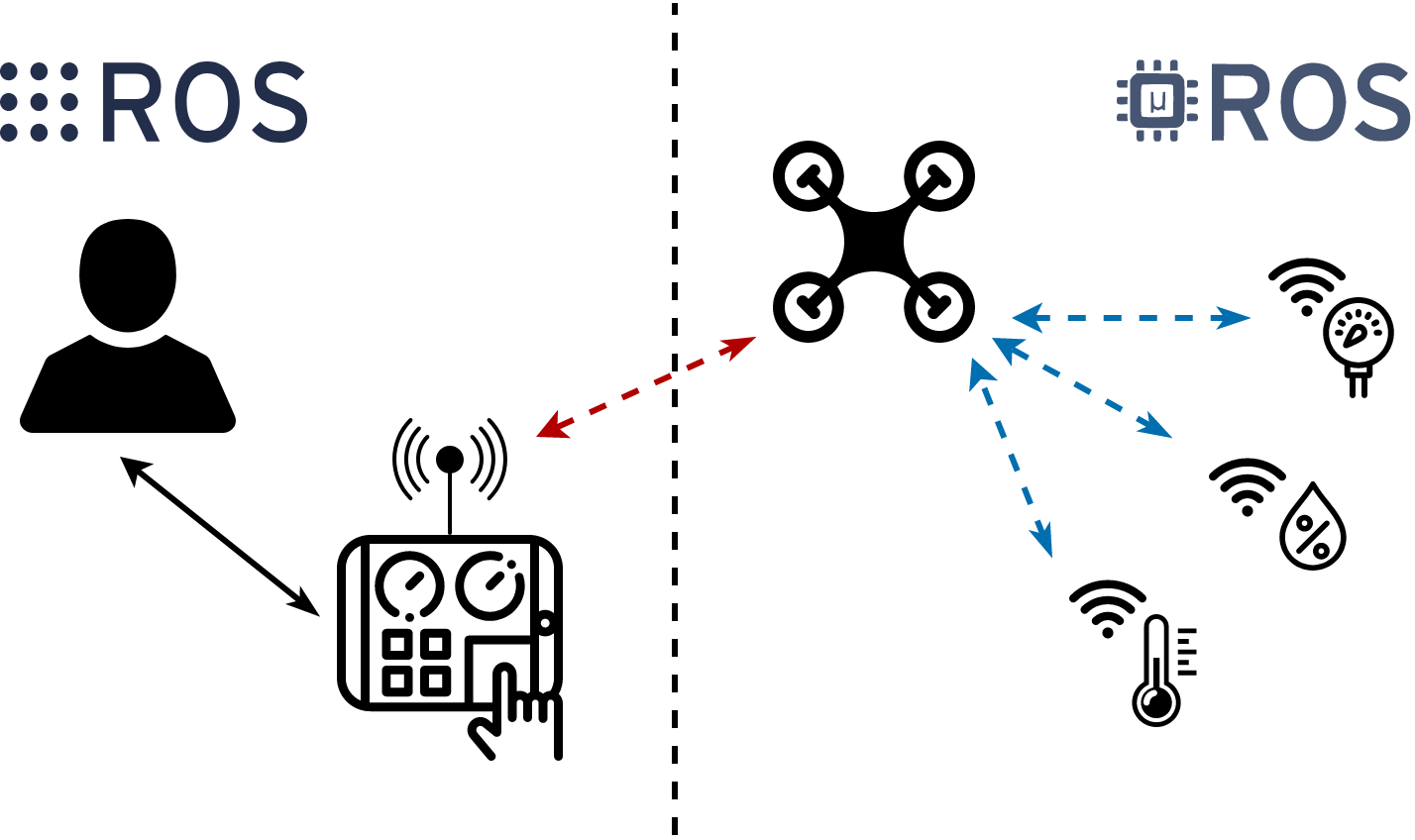 In this demo there are three different micro-ROS actors (MAV, GCS and Remote Sensors) which publish/subscribe to/from six topics:

A Crazyflie 2.1 running a micro-ROS-Client application which is in charge of publishing its attitude and odometry, and subscribing to flight commands and Remote Sensor’ data.

A general-purpose computer running a micro-ROS-Agent application which is in charge of publishing flight commands, and subscribing to MAV’s attitude and odometry data.

A SparkFun Wheather Station connecting to a Raspberry Pi 3A+ which is running a micro-ROS-Agent and a micro-ROS-Client application in charge of publishing the Remote Sensors’ data.

The figure below shows the current status of this demo.

In this demo there are two different kind of communication between its actors.

The following is a list of the hardware needed to reproduce this demo:

How to build and flash the firmware?

To start the application just three steps are needed:

To stop the application just down the Docker Compose:

Purpose of the project

The software is not ready for a production use. It has neither been developed nor tested for a specific use case. However, the license conditions of the applicable Open Source licenses allow you to adapt the software to your needs. Before using it in a safety relevant setting, make sure that the software fulfills your requirements and adjust ot according to any applicable safety standards (e.g. ISO 26262).